A Guide to Understanding Gender Identities 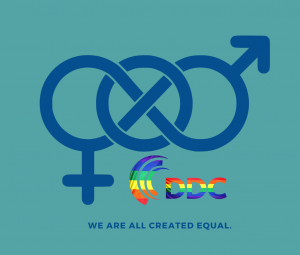 At DDC our Equality, Diversity and Inclusion Strategy sets out our team values. They confirm our strong commitment to equality through developing a culture which values, respects and celebrates diversity making it a place where people want to work because they know that we take a pro-active approach to advancing equality. Our values set out our approach to embedding equality and promoting diversity and inclusion, including the way we lead and the way we work with each other and our partners. They embrace the rich internationality of our staff and the diversity of our local community and promote a culture of respect, dignity and inclusivity.

DDC’s vision is to be recognised as an actively anti discriminatory organisation that upholds and promotes best practice in equality, diversity and inclusion and an active ally for change.

DDC’s mission is to embed principles of equality, diversity and inclusion into all areas of our business, driving real change in how it works with our customers and communities, our supply chain and our employees. This is way we would like to raise awareness with our community regarding gender identity.

The definition of gender in Cambridge dictionary is: “a group of people in a society who shares particular qualities of ways of behaving which that society associates with being female, male or another identity”.

The World Health Organisation defines gender as “the characteristics of women, men, girls and boys that are socially constructed.  This includes norms, behaviours and roles associated with being a woman, man, girl or boy, as well as relationships with each other. As a social construct, gender varies from society to society and can change over time.”

What is gender identity?

The term Gender Identity first appeared in the 1960s and it is still changing as our knowledge evolves. On the Human Rights Campaign website (https://www.hrc.org/resources/sexual-orientation-and-gender-identity-terminology-and-definitions) the gender identity is described as “One’s innermost concept of self as male, female, a blend of both or neither – how individuals perceive themselves and what they call themselves. One’s gender identity can be the same or different from their sex assigned at birth.”

Below we have created an infographic with the types of gender identity, however it is important to acknowledge that labels may help a person understand their identity, but gender identity may not fit into a category. People may identify in several ways so let’s all keep an open mind.